On April 30th 1960, the Slim Princess made its final arrival at Laws depot.  The then 51-year-old Baldwin Engine No. 9 was unceremoniously pulled by a 50-ton diesel locomotive, while a smoky fire built in the smokestack tried to replicate a working steam engine, a salute to days gone by.

During the 1950s, people occasionally piled onto railroad cars in Keeler, CA in southern Owens Valley, and enjoyed the experience of rumbling along, riding-the-rails behind the Slim Princess, one the last of the narrow gauge common carriers west of the Rockies.  No one knows when for sure, but at some point there was a last-run of the Slim Princess as an oil-burning steam locomotive when it exhaled its hot vapor into the dry valley air for the last time.

The town of Laws and its depot have a rich history all their own. In the late 1800s and early 1900s Laws Depot, then called 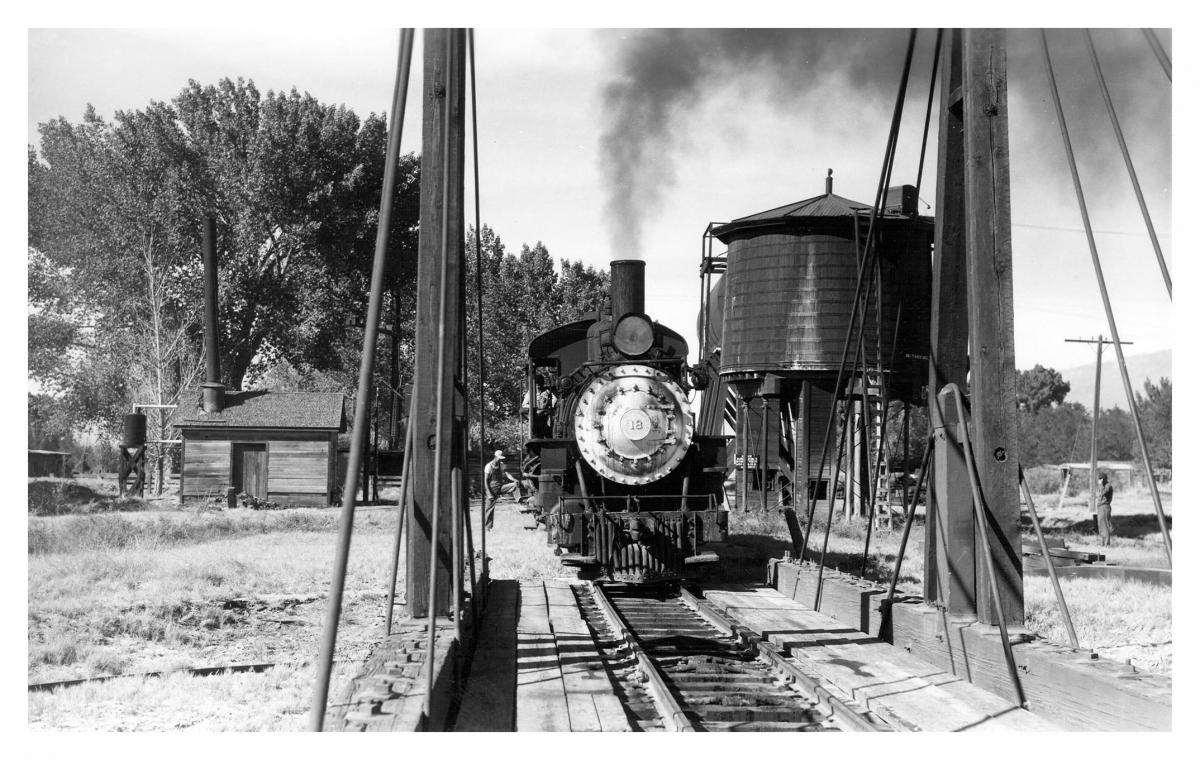 Bishop Station, was a busy terminal offering the only “modern” mode of transportation in and out of the Owens Valley.  A hotel, restaurant, school, post office, grocery store, and of course patrons on the Carson & Colorado, all provided jobs and economic stability. But, as the 20th century marched on, the town faded, eclipsed by the growing population of Bishop.

The end was at hand in 1959 when Southern Pacific began the process of shutting down the railway.  Even though S.P. expressed “great affection for the unique branch,” the “declining and unpredictable use of the line… [meant it] can no longer be justified as an efficient operation.” In April 1960 the rails went silent, and the Slim Princess ended its historic 77-year run.

Within the month, the rails between Laws and Keeler were being ripped up. In the book Slim Rails Through the Sand, author George Turner wrote, “the ink was hardly dry on the last train orders of April 29, 1960, when the first rails were uprooted.  Bulldozers were busy in Keeler that morning clearing a roadway for asphalt pavement.” 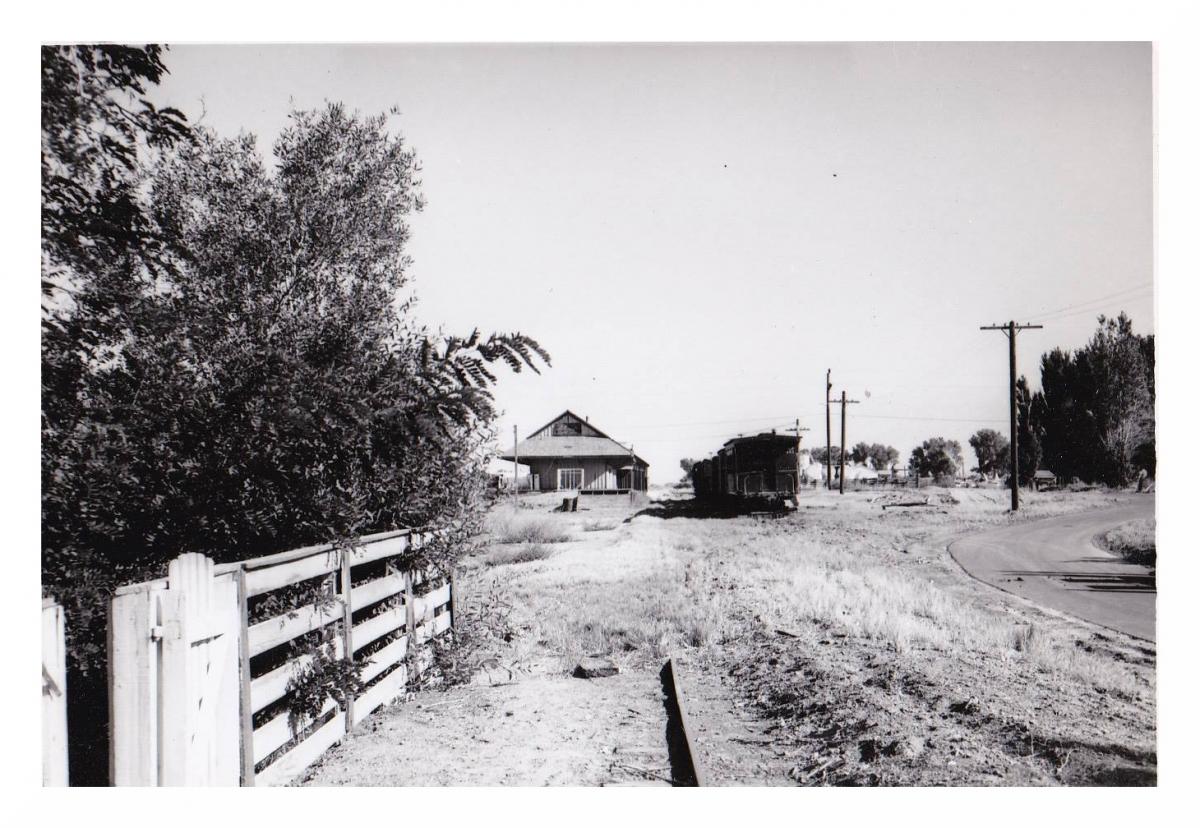 According to Howard Holland, son of a pioneer family who brought movies and theater to the Owens Valley, Southern Pacific offered Inyo County the entire railway, “lock stock and barrel,” from Keeler to Laws “but the Supervisors didn’t want any part of it.”  So S.P. began selling the baggage, freight, and passenger cars to local farmers for storage; and other rolling stock ended up as backyard curiosities.

The Laws Depot was now quiet, kept company by a few nearby residents and the encroaching sagebrush and grass.
The name “Slim Princess” was loosely used to represent the three engines that now found new homes. According to Railroads of Nevada and Eastern California – “Old No. 8 became an exhibition piece in Carson City, while No. 18 attained the same exalted status in Independence.”  (The local restoration group, Carson & Colorado Railway, has restored No. 18 to a fully functional steam locomotive and can be seen “exhaling its hot vapors” at special times at the Eastern California Museum in Independence and the Laws Railroad Museum north of Bishop.)

It’s now 1963 and engine No. 9 had been sitting alone at Laws for nearly three years.  Vandalism was taking its toll on the remaining railroad cars and other structures. A handful of old-timers just couldn’t stand the thought of losing this piece of history to neglect, so they stepped in to save not only engine No. 9, but the entire historic Laws Depot.  In February 1964 those old-timers formed the Bishop Museum and Historical Society. The Slim Princess, and the depot itself, now had a chance for a secure future.

Six months later, in July of ‘64, Inyo County accepted a gift deed from Southern Pacific - eleven acres of land under the depot, agent’s house, oil and water tanks, and the rare turntable. In another six months, January 1965, the City of Bishop and County of Inyo negotiated an agreement with the new Historical Society, giving them permission to create and operate a museum.   The effort to build a museum had begun.

With no dedicated building to administer the museum, story has it the depot itself was used as an office.  Bookkeepers would bring in boxes of the day’s paperwork, then at sundown they’d box it back up and take it home. But then Hollywood came to town, and that all changed.

In the summer of ’65, Paramount Studios came to Laws to shoot a few scenes for the 1966 Steve McQueen movie Nevada Smith.  Film crews built props which included: a replica two-story boarding-house called Drovers Cottage across the street, a few corals, and two small buildings, one of which was west of the depot.  When filming was complete, they left behind the hollow-shelled structures. 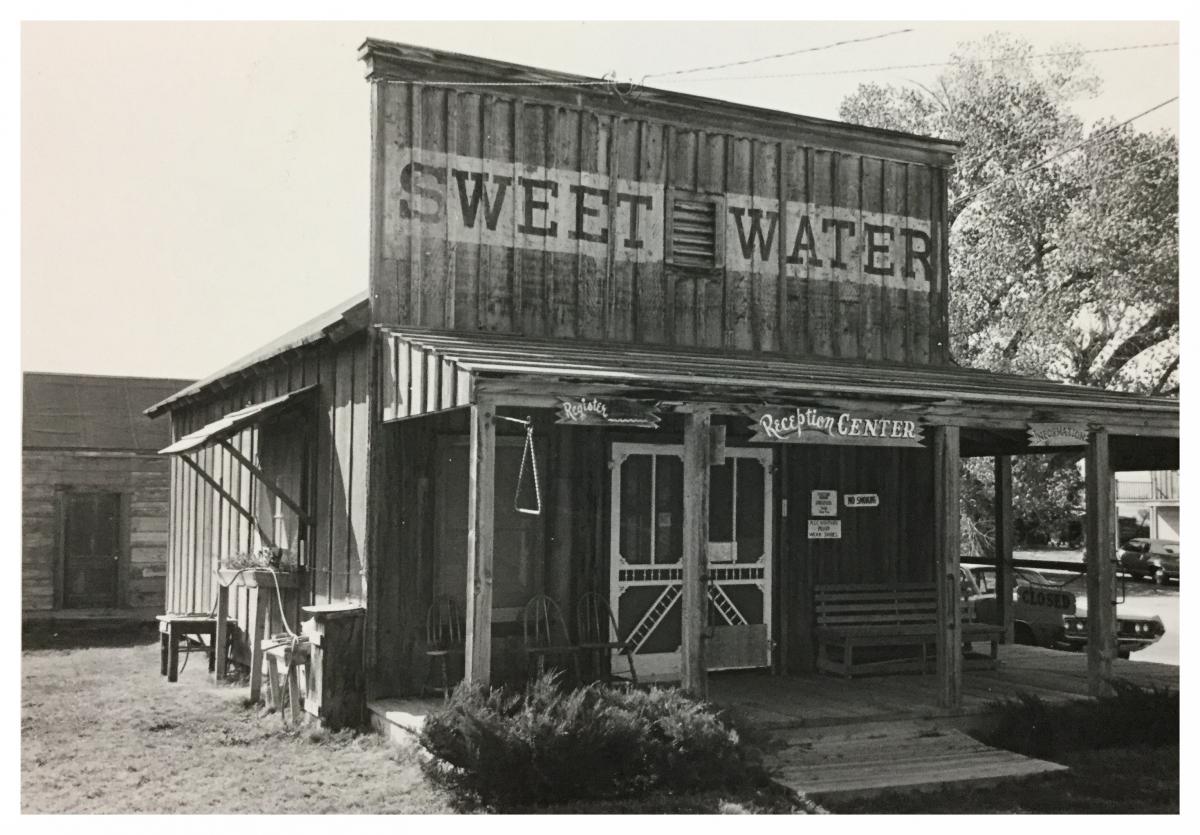 The pretend building, west of the depot, displayed the name Sweetwater, the hypothetical town McQueen visited in the movie. Its location, right next to the main road, made it perfect for a reception center.  Museum volunteer’s went to work framing the interior and created a real building. They now had an office, as well as a period piece that would greet future visitors.

The Laws Railroad Museum was now a reality, opening to the public on April 1st 1966, exactly 83 years to the day from when the Carson & Colorado’s Slim Princess first steamed into what was then called, Bishop Station.    Although the doors were open, there wasn’t much yet to look at. 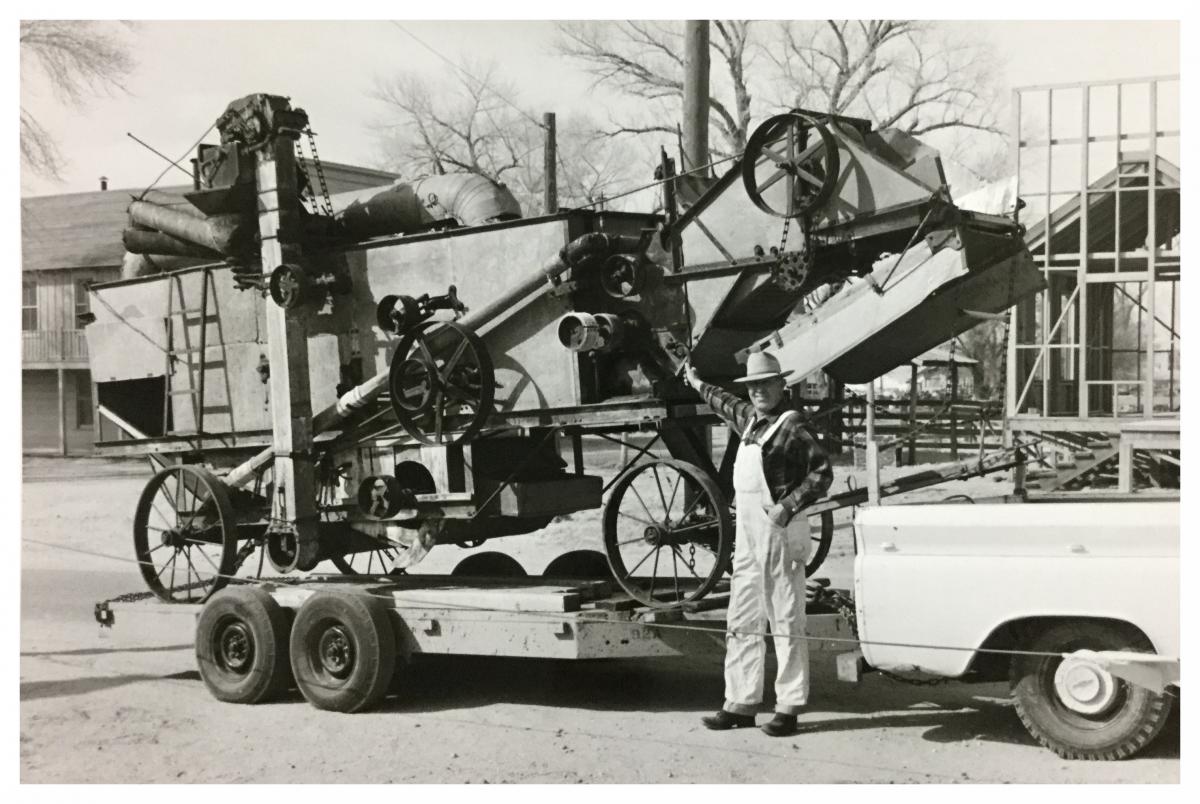 Howard Holland recalls: “When they had the depot open to the public, they had artifacts all strung around the depot, what few they had; that was their only display room.  The Agent’s House was still closed up.”  So Louis Arcularius, son of local ranching pioneers, brought in old farm equipment and placed them around the grounds.

The Bishop Museum and Historical Society initially was very small; the first meeting had just 6 old-timers.  But according to Holland, between the year 1966-1968 “they started getting more members . . . and [it] became kinda more of a social club, they didn’t have much [on the museum grounds] to show for it.”

Holland describes the first few years of the Society: “They had annual meetings at the Masonic Temple with dinners and speakers - actually ‘speaker’ as Lois Cleman did all the speaking. She was a dignified, highly refined lady.  She ran the whole meeting and it went on and on and on and on…everybody sitting there moaning.” Cleman, who operated the Inyo Store, Bishop’s oldest building across from the theater, was the driving force for the museum; but eventually turned it over to Alice Booth who became the museum administrator.

Laws Museum grew very slowly at first, starting with museum members painstakingly restoring the Agents House with authentic period furnishings actually used by the early pioneers. From the mid-60s to the early-70s, members and volunteers had occasional “work parties” to clear the grounds, trying to stay ahead of the brush and weeds. Then then buildings began to arrive. 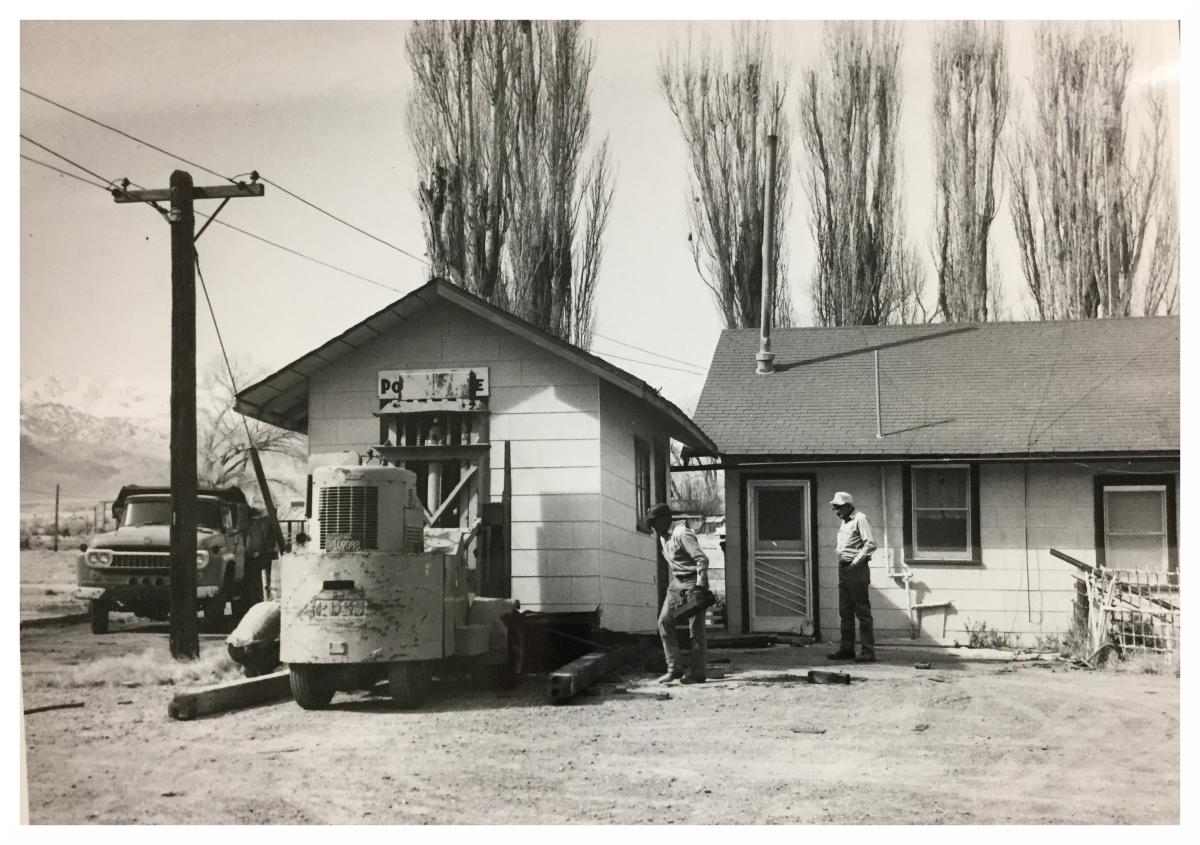 Holland recalls: “The first historic buildings that were placed on the grounds were the old Laws post office [and] the postmistress’s house, and [it] went from there.”

By the mid-1970s people began donating artifacts and whole buildings:  the early Laws mercantile store was moved to the property, an entire circa 1900 ranch home was moved in and filled with period furnishings, and the original 1909 North Inyo School found a home there as well. 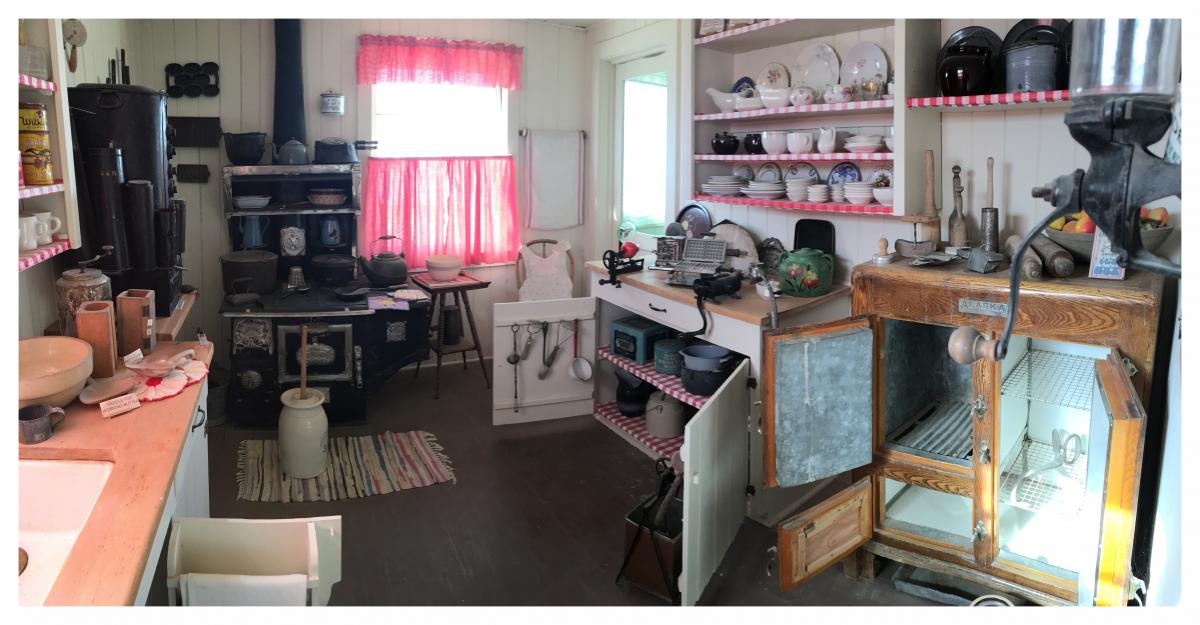 The historic buildings began filing up with the actual tools-of-the-trade used by pioneer tradesmen:  doctors, barbers, dentists, newspaper printers, saloonkeepers, homemakers, farmers, cowboys, blacksmiths, miners, and more.  And not all the displays were static; eventually there was a fully functioning stamp mill, a fully restored self-propelled Brill Car that today carries tourist as it did years ago in Death Valley. And of course there is the Slim Princess steam locomotive, complete with box cars, passenger cars, and the rare hand-operated locomotive turntable.

Laws Railroad Museum became California Historical Landmark No. 953 and is listed on the National Registry of Historic Places.  People from around the world come to see firsthand what turn-of-the-century-life was really like in the Eastern Sierra’s Owens Valley.

The Laws Railroad Museum was the dream of a handful of people, and must have exceeded their expectations.  Local volunteers have donated countless hours, contributing their time and skills for over 50 years, creating one of most unique outdoor museums in the Western United States.  It is jam-packed with indoor and outdoor displays. Just 4-miles north of Bishop on Highway 6, the Laws Railroad Museum will leave you feeling you’ve traveled back in time. The image you take home will be indelible.